“We need to reject any politics that targets people because of race or religion. This isn’t a matter of political correctness. It’s a matter of understanding what makes us strong. The world respects us not just for our arsenal; it respects us for our diversity and our openness and the way we respect every faith.”

As a retired secondary school educator, I am a firm believer in lifelong learning, and it need not take place in a formal classroom. Today, the Internet allows anyone who is curious to discover information and analysis about any topic they can imagine. It is in the context of the lifelong learner that I wish to reflect on President Barack Obama’s words quoted above from his final State of the Union Address on January 12, 2016.

In my study of history, I realize that human progress does not occur in a linear pattern and that often we regress on the way to positive growth. In some very tangible ways, we are experiencing a regression in our behaviour towards others today. News headlines from around the globe give testament that division and polarization around extreme ideas and attitudes are fuelling discord and conflict between us.

At the root of this discord is a startling lack of respect for others. What do I mean when I speak about respect? The teacher in me goes directly to the dictionary and in my case, several dictionaries. I was dismayed to find the term defined as having a high or special regard for someone. This definition is far too narrow. What about the man who lives down the street from me? I don’t know his name or anything about his talents, skills, accomplishments, attitudes or beliefs. So what am I to hold in high regard? What about all the people in the world with whom I’ve never been in contact? Do I respect them because their country is powerful or wealthy? Perhaps, but how do I approach a stranger with respect?

I began to understand the essential concept of respect when I came across the phrase, “to consider worthy…” The lights came on, and I knew I had found my elusive key. Every human being must be considered worthy of the same freedoms that I desire, worthy of consideration,  of assistance when needed, and fair treatment. We are all worthy of being free from prejudgment based on physical traits, age, culture, and beliefs; of having the opportunity to live in a healthy environment and to be successful. Most importantly, respect means being considered worthy of equal treatment.

The polarization I spoke about earlier has driven many of us to demonize anyone who disagrees with us. We see this unfolding each day in the United States as Republicans and Democrats have no kind words for each other. Fear brought on by years of terrorist attacks causes us to regard Middle Eastern people with suspicion and distrust. They are the enemy! Protect the country by closing our borders! These things are happening in many places around the globe, not just in America. Yet America, a nation that has held itself up to the world as a beacon of hope for over two hundred years is now projecting rancour, disrespect, and bullying. Fair or not, if something happens in the U.S.A. the whole world knows about it quickly. My country, Canada, is guilty of many of the same things, but the world rarely hears about it because we’re just… Canada – no big deal.

I also understand that societal or global change begins within an individual and spreads from there. Upon introspection, I’m not pleased with what I see in my heart, my words, and my attitudes. Before I can respect other persons, I must accept their humanity and see them as worthy beings. I don’t do that when I demonize and dehumanize people who anger or upset me. I don’t have to agree with them to be respectful, but if I accept another person as a worthy human being, I must find better ways to express my disapproval, disagreement, or dismay with another’s choices or beliefs. As a writer and blogger, I have not done well in this regard. In my own way, I have participated in the politics of division that Obama warns us against.

President Barack Obama’s speech contains wisdom and truth. I need to step back and consider his words carefully. We have clear evidence around us that divisiveness and polarization exist between people today, people in our own countries and between people around the globe. This makes us weak and ineffective. We have lost sight of the main reason why humans created civilizations back in antiquity – to work together in peace to survive, build robust economies, and express our humanity, our very soul, through the arts. Our diversity is our strength! Ethnocentrism is the belief that holds one culture or ethnic group superior to all others. That is intellectual arrogance at its worst! I may espouse liberal ideas and policies, but I need to consider the conservative positions of others. When we do battle over these things, we all lose!

If we fail to accept others as worthy beings, then we have failed to respect them and ourselves. If I demonize you for something you said or did, I have disrespected myself. Without respect, there is no building for tomorrow. There will be no working together for the common good. I need to learn to respectfully disagree and criticize, and then put forward my ideas with humility. None of us has a monopoly on wisdom because we have different perspectives – and those perspectives can help us arrive at the best solutions.

I need to do better.

My friends, I was honoured to be named the 2020 RWISA “SUPREME” Book Award Grand Prize Winner for my first collection of REFLECTIONS.  I hope you’ve enjoyed the reflection above from my upcoming second grouping of interpretations in REFLECTIONS II.  Today, my first collection is being hosted over at Watch Nonnie Write!  I hope that you’ll drop by to soak up the reflection, “DON’T TRIP ON YOUR WAY TO GREATNESS!” 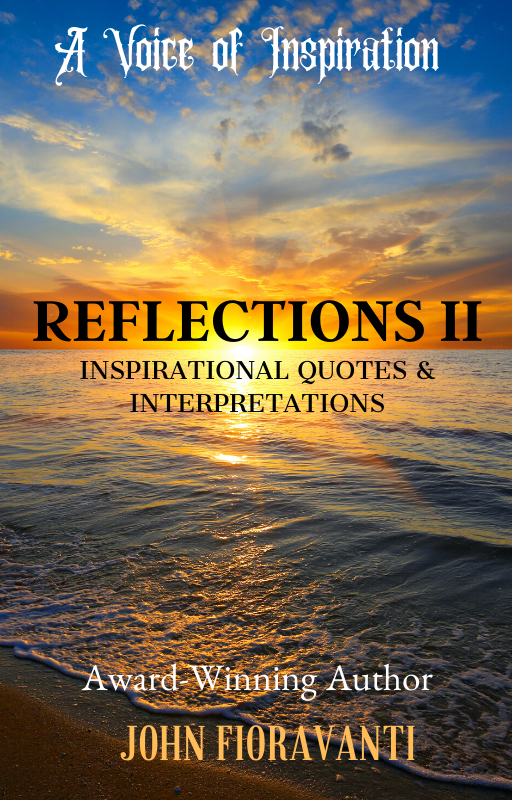 The word inspiration is derived from the Latin word inspirare which means to breathe into. It occurs when someone is filled with the desire to do something creative. While some cast aspersions on the existence of inspiration, I doubt that there is anyone alive who has not experienced this uplifting phenomenon. I call it uplifting because an inspiration lifts us to new or greater effort to do something – even if that something is to think about a topic in a different way.

I believe that inspiration is real and it is essential to the well-being of the human condition. This book is the product of inspiration. After the original volume Reflections: Inspirational Quotes and Interpretations was published, I was moved by the reaction of many readers to create a second volume. In their own words, these people claimed they were inspired to consider the selected quotes in the light of their own life experiences.