It is my pleasure to introduce Author, Sarah Angleton to my readers. Sarah writes historical fiction and is a member of Rave Reviews Book Club. Take it away, Sarah!

About eight years ago I completed my first historical novel. It was the coming of age story of a woman who had come to possess the manuscript at the heart of the Spalding Enigma, a nineteenth-century conspiracy theory which questions the origin of the Book of Mormon.

The theory suggests that rather than translating the scriptural work from an ancient language inscribed on golden plates discovered buried on a hill in rural New York, Joseph Smith, with the aid of another early leader in the Mormon movement, plagiarized it from an unpublished book written by a man named Solomon Spalding and titled Manuscript Found.

But like all good conspiracy theories, this one is missing something. If Manuscript Found did, in fact, exist, then it’s been ironically lost to history.

The theory is fascinating and provides a wonderful backdrop for historical fiction, but perhaps I should have known better because in the course of those eight years my novel also became lost.

Smoke Rose to Heaven, which has now finally become my most recent release, spent five years of its life under contract with a small press that, allegedly due to illness of one of the owners, failed to engage in the business of publishing.

At first, everything was going well. I’d worked with one of the editors on revisions and final editing was well underway, the owner and I had settled on a compromise for the title, and cover art was coming along. I soon had a galley in my hands.

Then the publisher went silent.

Other previously successful authors began to complain that they couldn’t get copies of their books for upcoming events and raised concerns about overdue royalty statements and payments. Editors who had worked with the press for years heard nothing. Calls to the Better Business Bureau and the State Attorney General yielded no results.

Everyone was left scrambling. My book, which had not yet sat on a bookshelf, was for all practical purposes, lost.

Fortunately, my tale of woe has a happy ending. I had already written a companion novel called Gentleman of Misfortune and was able to self-publish that title so that readers so patiently waiting for a book I’d told them was coming would have something to read in the meantime. A little more than a year after that, the end date of my contract arrived and the copyright officially, legally returned to me.

Now at the end of this often incredibly frustrating journey toward publication, I have a novel that I am so excited to share with the world. It’s about a girl and a manuscript that was lost. Of course, if you want to know the ending of that story, you’ll have to read the book.

Diviner Ada Moses is a finder of hidden things and a keeper of secrets. In her possession is a lost manuscript with the power to destroy the faith of tens of thousands of believers.

When a man seeking the truth knocks at her door with a conspiracy theory on his lips and assassins at his heels, she must make a choice.

Spurred by news of a ritualistic murder and the arrival of a package containing the victim’s bloody shirt, Ada must either attempt to vanish with the truth or return the burden she has long borne to the prophet responsible for one of the most successful deceptions in US history.

Protecting someone else’s secret may save Ada’s life, but is that worth forcing her own demons into the light? 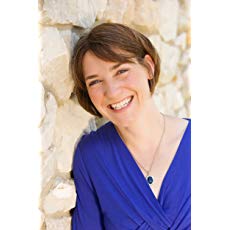 SARAH ANGLETON is the author of the historical novels Gentleman of Misfortune and Smoke Rose to Heaven as well as the humour collection Launching Sheep & Other Stories from the Intersection of History and Nonsense. She lives with her husband, two sons, and one loyal dog near St. Louis, where she loves rooting for the Cardinals but doesn’t care for the pizza.

To follow along with the rest of Sarah’s tour, please drop in on her 4WillsPub tour page.

Sarah is giving away 5 e-book copies of SMOKE ROSE TO HEAVEN and all you have to do for a chance to win a copy is to leave a comment below.
If you’d like to take your book or books on a virtual blog tour, please visit us at 4WillsPublishing.wordpress.com and click on the VIRTUAL BLOG TOUR tab.
Thank you for supporting this author’s tour and also the blogger of this post!

38 thoughts on “Welcome to Day 1 of the “SMOKE ROSE TO HEAVEN” Blog Tour! @SarahAngleton @4WillsPub #RRBC”