John Ware, born into slavery in South Carolina, was raised in Texas became a skilled cowboy before settling in the Alberta area in Canada. 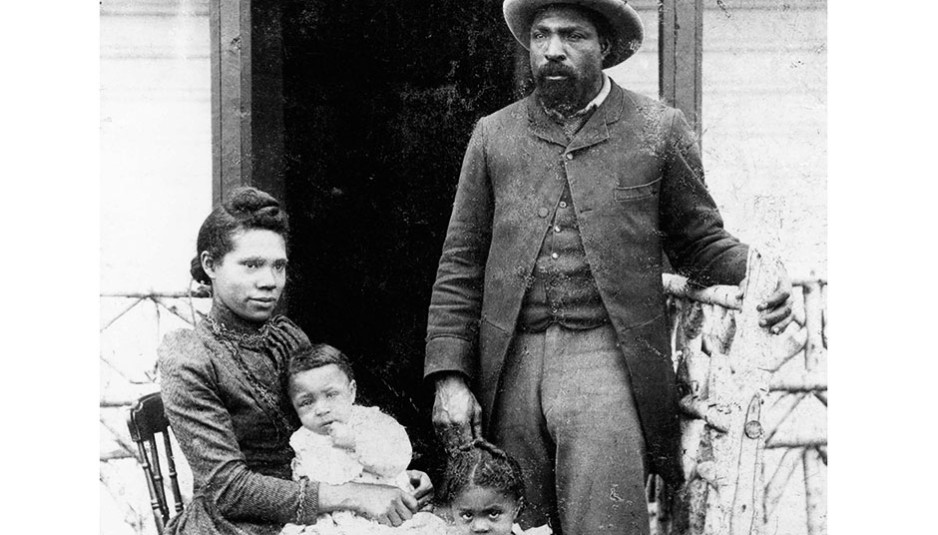 John Ware, cowboy, rancher (born 1845 near Georgetown, SC; died 13 September 1905 near Brooks, AB). John Ware was born a slave on a cotton plantation and apparently grew up on a small ranch in northern Texas, although the historical record of his life is far from clear. He gained his freedom at the close of the American Civil War (1865) and drifted west, eventually finding work on a ranch near Fort Worth, Texas.

Ware lived in what we may consider the golden age of the ranching frontier and achieved heroic status for his impressive physical strength, remarkable horsemanship, good nature, and courage. The true story of the man is difficult to discern from the legends built around him. Documentation about his life is rare and most of what is known about him comes from commentaries written by fellow cowboys, but those accounts did not begin to appear until the late 1930s. Ware was predeceased by his wife and died while his children were very young.

In the many stories told about John Ware, his strength and skill with livestock are central features. He was said to have walked over the backs of penned steers without fear and that he could stop a steer head-on and wrestle it to the ground. It was also said that he could break the wildest broncos, trip a horse by hand and hold it on its back to be shod, and easily lift an 18-month-old steer and throw it on his back for branding.

Regardless of the level of hyperbole extant in the stories of John Ware, his status as regional folk hero gives testament to how well-respected he was. The characteristics attributed to him are those shared by the frontier heroes of cowboy subculture. What distinguishes him the most, however, is how successfully he, as a Black man, established himself in the Eurocentric society of 19th-century Canada.

Ware’s freedom came at the same time that ranching spread across the Midwestern United States. He traveled west and honed his skill as a cowboy. An experienced cowhand by the late 1870s, he was employed driving herds of Texas cattle northward along the Western Cattle Trail to the distant ranges in Wyoming and Montana territories. In 1882, he was hired to help bring 3000 head of cattle from the US to Sir Hugh Allan’s North West Cattle Company ranch, commonly known as the Bar U Ranch, in the foothills southwest of Calgary. Ware found that experienced cowboys were much in demand in this northernmost edge of the ranching frontier. He remained in the area and worked for several large cattle companies. In 1884 he started working for the Quorn Ranch on the Sheep River; it had a large herd of cattle but it also raised horses for the English market. Ware was put in charge of the horse herd.

In the spring of 1885, a large round-up was undertaken from Fort Macleod to search the foothills from Calgary to the Montana border. It involved 100 cowboys, 15 chuckwagons, and 500 horses. Ware represented the Quorn Ranch and was described in the Macleod Gazette as “not only one of the best natured and most obliging fellows in the country, but he is one of the shrewdest cowmen, and the man is considered pretty lucky who has him to look after his interest. The horse is not running on the prairie which John cannot ride.”

Before the round-up began, Ware registered his own brand, which was known as the four nines (9999) or walking-stick brand. In 1898 he re-registered it as three nines. He started his own ranch in the foothills in 1890 and in 1892 married Mildred Lewis, who had come to Calgary with her family from Ontario. In the face of increasing settlement in 1900, Ware moved to a new ranch site along the Red Deer River east of Brooks. His home was destroyed by the spring flood of 1902. Ware re-constructed the cabin for his wife and five children (a sixth child had died in infancy) on higher ground overlooking a stream, which is now called Ware Creek.

The family did not occupy the new home for long. In April 1905, Mildred died of pneumonia and typhoid. The following September, Ware was killed when his horse tripped in a badger hole and fell on him. His funeral in Calgary was attended by ranchers from around the region; John Ware was mourned by the ranching community as one of its most respected members.

John Ware was known to his friends and neighbors as “N—er John.” The racism of Ware’s time was enacted with thoughtless disregard for the individual; even though people liked and respected Ware, they referred to him in a way that we today would immediately label as pejorative. N—er is a potent word; it conveys the sense of inferiority and ignorance even as its historical context reveals the tragedies and triumphs of American history.